I'm calling this series of pieces based on heraldry, the La Paz collection.
In Spanish, the word means Peace.
While that may seem like a juxtaposition when you see the medieval shape and armored form, each shape and cut out has its own meaning, which I've put together for my own Coat of Arms.
These were my original thoughts when I began assembling this collection:
I have, for the past two years allowed my occasionally overwhelming feelings of anxiety far too much power, occasionally warranted, but most often not at all.The stag in this form traditionally represented peaceful strength, the strength of a warrior, capable of fight but unwilling to waste strength or energy until provoked. 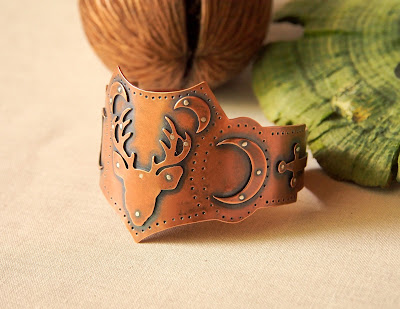 The crescent moon, two of them above the stag and two on the sides, which represent serenity and power to conquer the everyday. 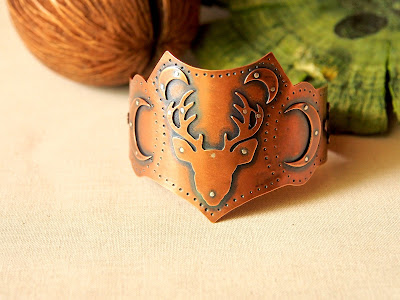 Along the side, a sword. Often seemed as a symbol of war, it actually stood for justice, which is one of the pillars of peace. 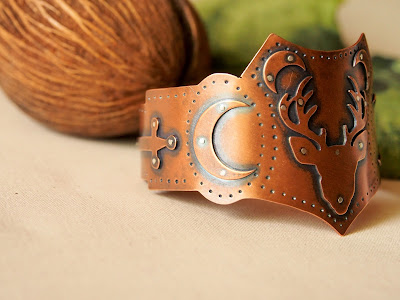 The entire cuff, cut from copper, each piece hand cut as well and carefully assembled with sterling silver rivets, the final piece has been given an earthy patina. 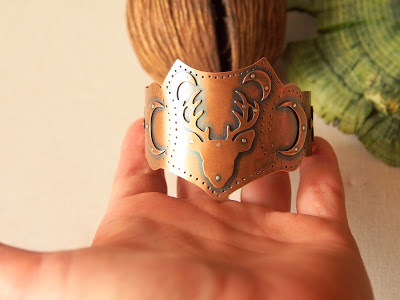 The making of this piece, meant as much as the wearing. The heart that went into it, and the slow work of my hands...those are the things I've tried to capture in every detail.