There and Back Again

It has been so long since I've haunted this little space.
I haven't forgotten to write, it's just that lately, my words have been so tied to my work that I find the two inseparable and the stories are found with the listings to each piece, or on my Instagram.
But, as my blog feels more like a diary, it feels right somehow to leave the work of the past couple of weeks here on this page.
It is full of photos, but also of words. I hope they both inspire.
La Paz Series 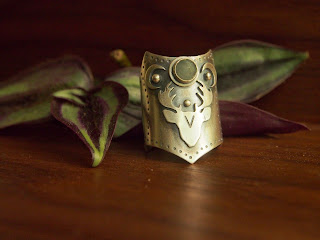 I have, for the past two years allowed my occasionally overwhelming feelings of anxiety far too much power. Occasionally warranted, but most often not at all, I built this beauty as a shield of peace. It is my first attempt at a saddle ring and heavily influenced by heraldic imagery that has inspired me so much this year. The stag in this form traditionally represented peaceful strength, the strength of a warrior, capable of fight but unwilling to waste strength or energy until provoked. The crescent moon, two of them, which represent serenity and power to conquer the everyday. The aquamarine, chosen mostly for color, blue gray, a cool color associated with calmness and peace and also my daughters birthstone. 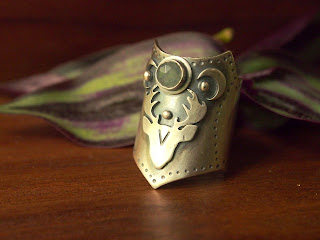 Soldered on the curve to a saddle cut intentionally to resemble a shield. Every aspect of this ring a personal message sturdy enough to pass to the next generation.
The pendant carries the same message, a slightly less dramatic but nonetheless powerful version of the ring. 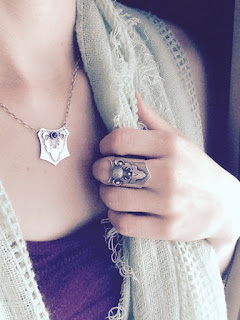 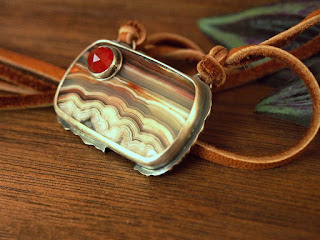 We call them the Ups and Downs, the Mountains and Valleys and we vow to stay side by side as we walk through them. These are the metaphors, the images we conjure up to describe the hard times and the good times, the ascent and descent on life's road.
We've all been in the valleys, the air is thick and heavy, the ground wet and the heat relentless. And then there is the mountain, cold, clean air and a view that goes on for miles, placing the valleys in perspective.
This pendant is reversible, worn either to ascend or descend. 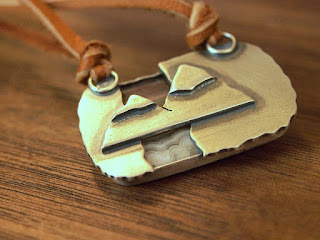 The sun rises in this ring, or falls depending on how you slide it on your finger, or even whether your hand is upstretched to the sky, or weighted toward the ground.
The bulk of the ring has been given a dark patina and polished, but the sun is bright whether it ascends or descends. 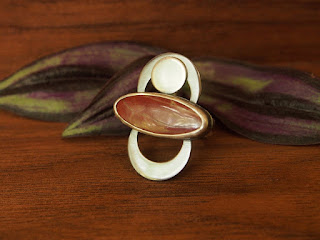 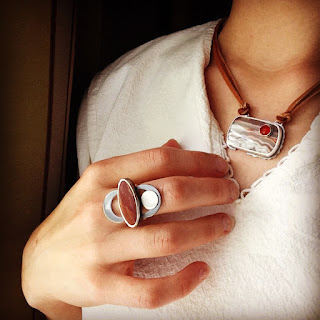 Tears of the Earth Ring 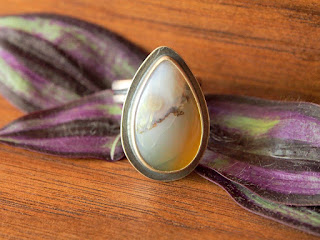 I have seen landscapes in stones before, cut slabs of rock whose layers mimic the rise and fall of desert dunes, or whose color reminds you of a sunset, but this was new to me.
Look closely and it is as if the Earth cried tears full of mountains into this piece of Ocean Jasper. The perfection of an orbicular inclusion appears to ride high like the sun just above the jagged edge of a mountainside. It is truly a tear of the earth.
I've tried to capture its opposite on the back, a tiny cut out of a moon rising over the mountains, and a smoky quartz on the band.
I've placed the band slightly higher and ring sits low, flirting with your knuckle as you wear it. 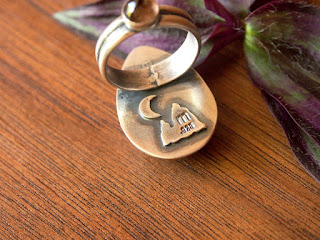 Finally, these:
The Thing with Feathers  Pendants
“Hope” is the thing with feathers -
That perches in the soul -
And sings the tune without the words -
And never stops - at all -
And sweetest - in the Gale - is heard -
And sore must be the storm -
That could abash the little Bird
That kept so many warm -
I’ve heard it in the chillest land -
And on the strangest Sea -
Yet - never - in Extremity,
It asked a crumb - of me."
-Emily Dickinson
The tiniest of pendants to remind you every time you touch it, that Hope is free, it is constant, and also, the most human of all the emotions. 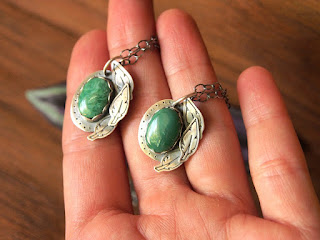 These are all in my shop:
www.labellajoya.com