Margie and Me - Attacus Atlas Moth

I chose #185 Attacus Atlas Moth. Named for the appearance of the "maps" on it's back, it's a mix of bright red, lavender, yellow, and Margie throws in aloe-green as a complement to the other colors. 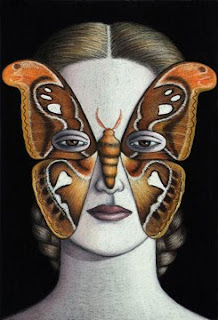 Attacus Atlas Moth Mask, Deborah Klein
It's the world's largest moth in case you were wondering and as I look at it, I can feel my knees getting weak at just the thought of something like that landing on me.
I would probably pass out. They live only in Southeast Asia which is good because that probably means I won't have to deal with them anytime soon. 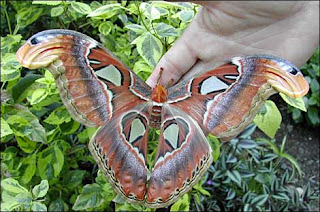 Enjoy the first day of your weekend, and remember the next time there's a strange large bug heading toward you, look on the bright side because it could be worse....it could be a flippin' huge Atlas Moth!
Posted by Marcie Abney Carroll

Email ThisBlogThis!Share to TwitterShare to FacebookShare to Pinterest
Labels: Margie and me