Wow.
I've been so overwhelmed with your response to my tutorial sale and I can't thank you enough for your support. I'm really glad that some of my customers were able to pick up tutorials that they'd been wanting for some time and save money for other things.

Your support means so much, so Thank You. ;)

I thought I'd take this opportunity to show you what's been going on around here jewelry-wise and also some things that have really been on my heart and mind lately.

First up, I've been working with these lately.
I bought these probably 5 years ago from Lucky Accessories in Raleigh.
They are vintage wallpaper pendants soldered and anchored between two microscope slides.
I wore them for a couple of years around my neck with just leather cord, but I thought they needed a little oomph, so I've been trying to create some interesting cords to hang them from. 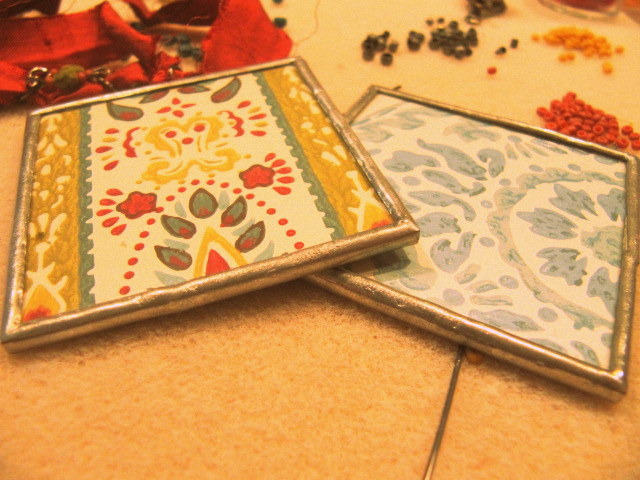 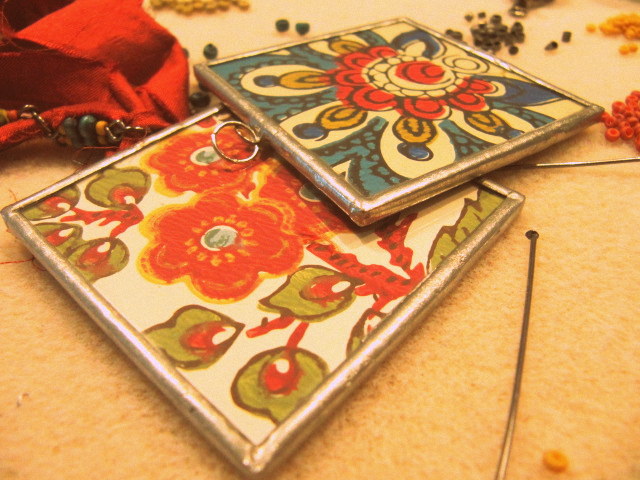 Okay, the last thing that I want to talk about is something that has really come to concern me over the past 8 months. I really began to do some serious research on our economy. I've seen the economic downturn affect the lives of people all around me very closely and I really wanted to know more about what we were facing and why.

What I found took me totally by surprise.

If you are an American, you must understand the monetary policy that drives our country. It is the most basic building block of our economy and it affects every single one of us every time we purchase something, pay a bill, pay our mortgage, pay our taxes...it is the foundation of our economy and most Americans know nothing about it.
We operate under a central banking system, in this country it's called the Federal Reserve. This is highly misleading because it is anything but Federal. It is not owned or operated by any elected official, it is a private banking cartel owned by private banks.
Did you catch that?
Here's a better explanation:

Now, I do not have enough time to explain this to you in any detail. I've read books about this and have been researching it for months. However, if you'd like a little insight into the kind of corruption that this brings on, I'll leave you with this:

I think we can agree that what they are doing has NOTHING to do with supporting the average American, but instead was designed to fill their own pockets.
If you want more, look here and here and here.

Now, there is a legislation that just passed the house yesterday designed to audit the Federal Reserve. Open the books and let everyone see exactly what they have been doing over the past decade.
H.R. 459 passed the house with an over 2/3 majority and supported by both Democrats and Republicans.
It now faces the Senate where Harry Reid, who supported auditing the Fed in 1995, has promised that it will not hit the floor of the Senate.

Here's the bottom line for me, I'm only 29, but I remember paying $1.50 for a gallon of gas and $2.50 for a gallon of milk. That same gas costs me $4 now and that gallon of milk? Almost 5 bucks.
I get so frustrated when I hear the political Right yell "we have to drill to bring down gas prices!" or the political Left blames the oil companies and their profits, but neither will breathe a word about the debasement of our currency by the Federal Reserve which Congress allows because the Fed writes them a blank check to fund their pet projects while those of us starting out or the elderly on a fixed income are robbed of their economic freedom.

I cannot force you to read this information or to do the research and if you want to label me as a political nutcase I can't stop you.
But my heart breaks for every American who has been living under the yoke of the planning of a few men to destroy the lives of the many for their own gain.
To that end I have been writing my representative urging him to vote to audit the Fed and I'll be writing my senator when I can get a moment to sit down and do so.

I've turned the comments off.
Politics in this country has become so divisive and I think it ought not be so.
I believe that in our hearts we all want to be completely free, free to succeed and free to fail and free to learn from both. If you do have questions, I'd love to answer them, you can contact me through my Etsy convo or e-mail.

I'll leave you with this:
"Give me control of a nation's money and I care not who makes its laws."
-Mayer Amschel Rothschild