First of all, thanks guys for your response to the banner tutorial from yesterday! I'm so glad that it helped so many! Did you see Ms. Emma's new banner?! If you created a banner using the tutorial, leave me a comment and let me see it!
Okay, back to business...in May, when I created my first tutorial, I was so excited. It was thrilling to see something that I had created become something that someone else would want to create.
So, I kept going, working hard to add new designs to paper and to share the creativity that was flowing from my fingers. 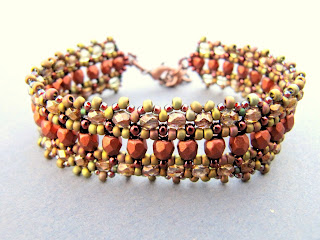 It really gave me a sense of joy to see what people were creating using my patterns. But, I wasn't content. If you've seen my work, you'll know it's very component oriented, meaning that I like to make smaller pieces of beadwork and connect them together to make larger pieces. (This is my current favorite.) 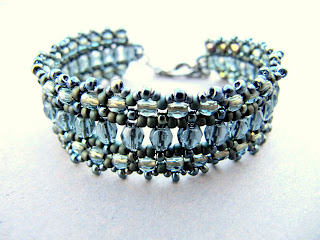 So, I set a goal for myself. To create an original design using a single weave, meaning I didn't want components, I wanted something that you could create with only one or two cuts of thread. The idea started to form in my brain about a month ago and after way too many sessions of trial and error, the idea finally became a reality.
I present to you Charlotte's Path.
She's delicate and feminine and each step sparkles as she moves. The best part?
My scissors only came out twice to finish her. She's deceptively simple, seriously, I think a beginner could create her without a problem. 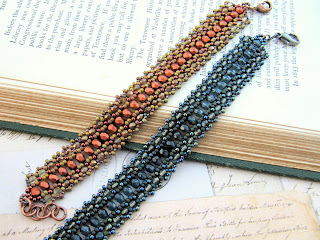 The instructions for creating her are in the shop, and for 24 hrs. only, the price for this bracelet tutorial will be lower than all my others.
Call it a celebration of a goal finally accomplished and the satisfaction of an idea that became a reality.