My sister came up with the term yesterday while we were cuttin' and pastin' and gluin' and beadin' and huntin' up things to put in these brand new bezels which arrived two days ago. (A special thanks to the United States Postal Service!) Okay, here's the goods in no particular order....
First up, a cut out of scrapbook paper with a clear bezeled top. (They accidently shipped us one that fit perfectly in the pendant so we decided to use it. ) 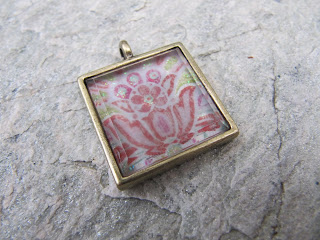 Secondly, a little round pendant with a tiny turquoise round which I did up with seed beads to match the pattern of the scrapbook paper. This was Emily's design, I just did the brick stitch for her. 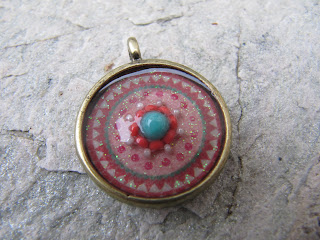 Then a little seashell planted on top of some complimentary origami paper from an origami kit we received years ago. (Emily's design) 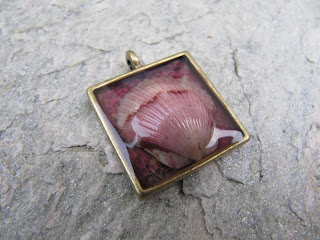 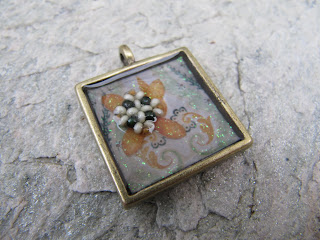 Then, a tiny seed bead leaf embellishing more glittery scrapbook paper! (I learned a valuable lesson here. The dark thread becomes doubly obvious under resin. Note to self: Use white thread or fireline.) 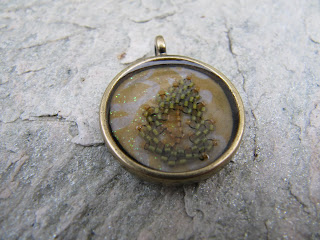 And then, finally, I did two rings. The first has no embellishment whatsoever. It's just a perfect cut-out of scrapbook paper. I originally thought that it was going to be boring, but now that it's dry. I really like it. 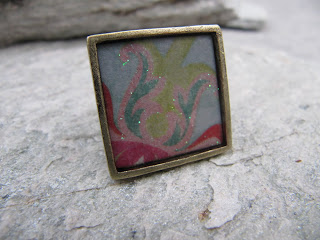 This last one is a tiny little bird flying over a Monet-esque naturescape. 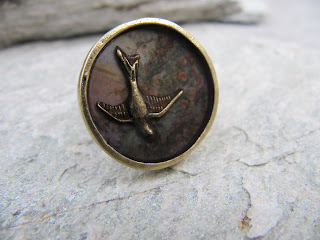 I must say that I think the experiment was pretty successful and I can't wait to get home today and cut and paste some more. Here are some tips that I found while using the resin.
First of all, I used ICE resin and the instructions suggest pouring a full ounce which ends up being a lot, so get together a good pile of stuff that you want to resinate (I know, I made that up too) before you start so you won't waste the resin.
Secondly, glue down everything that you want so that you have a lot less problems with bubbles, and the resin doesn't get under the paper. I think the resin seeped under some of the scrapbook papers and dulled the colors a little.
Last, I didn't add anything to the resin, but I liked the look of glitter which I acheived using glittered scrapbook paper. It also has the cool effect of making the glitter look like it was placed in certain spots.
Hope y'all have a good day and that you enjoyed my resin experiment!
Posted by Marcie Abney Carroll